Kano State is believed to have lost 110 persons to the COVID-19 pandemic. But if you take a walk in major streets of the state, residents are no longer masking up. Customers of commercial banks and bankers have jettisoned the face mask. The story is the same in schools, churches and mosques that were closed at a point because of the virus. Has the war against COVID-19 been won in Kano state? FANEN IHYONGO reports

Kano State Governor Abdullahi Ganduje was put under pressure by the COVID-19 pandemic. A total of 84,036 samples have been tested, of which total confirmed cases have risen to 3,971. 110 persons are feared dead as a result of the virus in the state. But if you take a walk in the major streets of Kano state -the once epicentre of COVID-19, you will observe that residents are no longer masking up. When this writer inspected commercial banks in the state two days ago, neither customers nor bankers wore a face mask. The story is the same in schools, churches and mosques that were closed some time ago because of the virus.

In Kano, Ganduje had to beef up the state’s preparedness capability. He rolled out three key measures: Preventive, Curative and Palliative (PCP). Prevention, they say, is better than cure, the Kano governor started with the preventive measures. He announced a lockdown and ordered strict adherence to the COVID-19 Safety Protocols recommended by the World Health Organisation (WHO), which include: use of face mask, social distancing, avoidance of handshakes and regular washing of hands with soap and water. The Ganduje administration produced and supplied millions of masks and hand sanitisers to this effect.

So, Kano entered a lockdown to stem the spread of the virus. But rather than prevent contraction and deaths, the lockdown in Kano in April last year brought a high number of unexplained deaths in the most populous state, raising deep concerns. President Muhammadu Buhari sent a medical delegation to conduct “verbal autopsies” to determine the cause of the mass demise in the Northern economic hub. But the state government issued a statement saying the “mysterious deaths” were unrelated to coronavirus. “After a thorough investigation into the immediate and remote causes of the deaths, the preliminary findings indicated that the deaths are not connected to the COVID-19 pandemic,” the state government said. So, what caused the close to 1000 deaths in Kano in a month, if not COVID-19? This writer found out that a few factors were responsible for the alarming count of the dead which was still not unconnected to the Coronavirus pandemic. First, most of the health institutions in the state which could not treat COVID-19 vacated their facilities, leaving patients with acute malaria, Lassa fever and other ailments to die. Secondly, a lot of hypertensive, diabetic, asthmatic and cancer patients had to die for lack of access to hospitals. Most of the dead had collapsed from shocks of the ‘no cure’ reports on the deadly virus, as it was first exaggeratedly reported. The lockdown affected every resident socioeconomically and psychologically, it was learnt.

Minister of Health Osagie Ehanire said the investigation found a total of 979 deaths recorded in eight local government areas of Kano at a rate of 43 deaths per day, compared with the typical death rate of roughly 11 deaths per day.

“With circumstantial evidence as all to go by, investigation suggests that between 50 to 60 per cent of the deaths may have been triggered by COVID-19, in the face of pre-existing ailments,” he said.

Ganduje decided to ease the lockdown and by the beginning of May 2020, the death rate went down. And Kano State was applauded for taking the lead in the test of Coronavirus in the country. Kano state’s laboratories were fully loaded to capacity levels for testing. Health workers were seen redoubling their efforts in terms of curative measures.

“Kano State is testing more than any State in Nigeria,” the Director-General, Nigeria Centre for Disease Control (NCDC), Chikwe Ihekweazu, stated. The NCDC boss even urged other states to emulate the Kano response model. Ihekweazu acknowledged that Kano State no longer had active index cases as it had before, and the NCDC had confidence in the state’s status. The NCDC DG stated “there was a time when Kano was criticised for its (poor) response to the pandemic, which made the centre send the biggest team to contain the situation. But the state government invested millions of naira and subsequently answered the critics.

“The Kano issue was being discussed a month ago. But the way we are talking about Kano today is incredibly different! It shows we can turn things around in certain states. And we can all turn it around if we work together.

“We need to work together across the federal and states; across partners and across whatever line we use to distinguish ourselves. This is what I keep on offering. The states in Nigeria should work together to protect the health of all Nigerian citizens, irrespective of which State they are coming from,” the NCDC Director-General said.

Kano, like other states across the country, was taken aback by the resurgence of the COVID-19 in mid-January. Hopes were almost dashed by the ravage of the new wave of the pandemic in which Nigerians in their hundreds were suddenly infected, rising death toll. Ganduje on January 21 announced that the virus was back in his state, spiking much harder and tougher than the first wave of the pandemic. He said the state recorded 17 deaths in 49 days, as the sample positivity rate increased to 12.7 per cent, compared to the overall positivity of 4.2 per cent. 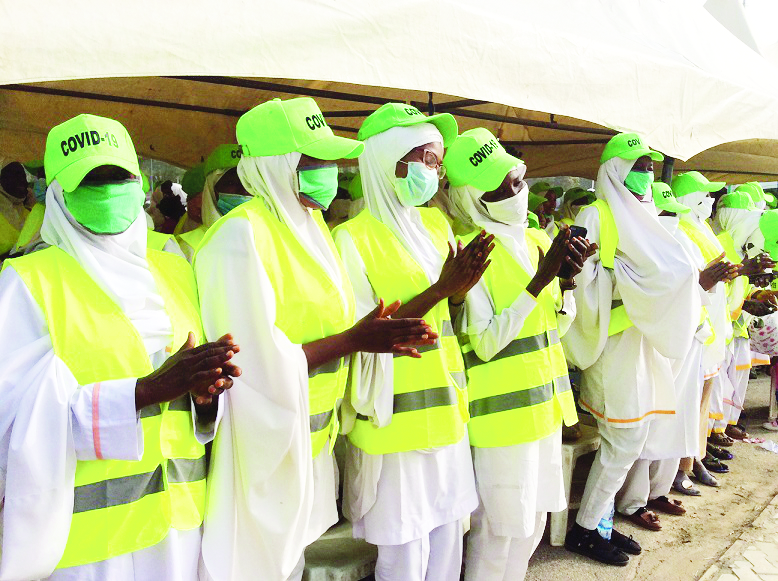 It was gathered 2,276 cases were treated and discharged and 5,083 persons were on contact tracing. The highest positivity cases, the state government said, were recorded in Nassarawa Local Government Council, with 624 cases, followed by Tarauni with 499 cases and Kano Municipal which had 286 cases. Ganduje regretted that despite the increased rise in COVID-19 positivity cases in Kano State, residents were refusing to observe the Infection, Prevention and Control (IPC) protocols.

Other challenges, the governor mentioned, included “poor public compliance to low risks perception (many do not believe COVID-19 is real), poor cooperation by confirmed cases to self-isolate themselves or be taken to isolation facility”. This writer gathered that it has been really difficult to enforce protocol compliance in the state.

Dr. Sabitu Shuaibu Shanono, who is the Deputy Coordinator, Rapid Response on COVID-19 in Kano State, said 17 persons died of the virus from December to January.

Kano, being peculiar with its population might, was in the eyes of the storm. The first step was to alert and sensitise the people. Ganduje held series of Stakeholders’ Sensitisation Meetings on the Second Wave of the COVID-19 at Africa House, Kano, for four days -from January 20 to 24.

The governor also met leaders of the National Union of Road Transport Workers (NURTW), Amalgamated Commercial Tricycles and Motorcycle Owners, Repairs and Riders Association and heads of major markets in the state. The governor met with them and urged them to ensure strict adherence to COVID-19 protocols at motor parks, markets and other public places.

Next were heads of tertiary institutions, academic and non-academic unions, Nigeria Union of Teachers (NUT) and selected headteachers of primary and secondary schools. At the end of all the meetings, Ganduje had an interactive session with journalists to synergise and give them updates on his efforts in fighting the second wave of the pandemic.

On February 1, Ganduje inaugurated 2,000 COVID-19 marshals that would help in enforcing compliance with the virus’ safety protocols, particularly the use of face mask. The COVID-19 marshals were formerly known as Kano Sanitation Vanguard, whose job was to inspect homes on sanitation days, it was learnt.

The governor said the decision to have marshals was taken because despite the new wave of COVID-19 was tougher than the first wave of the pandemic, residents of Kano were refusing to observe the Infection, Prevention and Control (IPC) protocols.

Seventy-seven Coronavirus deaths were recorded in Kano from April last year to January, Dr. Tijjani Hussaini, who is the Coordinator, Kano COVID-19 Technical Response Team, said during the inauguration of the Coronavirus marshals. Hussaini explained that the first wave was almost defeated in Kano, but the coming of the new variant, whose positivity, he said, was 13 cases of 100 tests, called for caution and adherence to all the safety measures.

Commissioner for Health, Aminu Ibrahim Tsanyawa, said Kano State was once an epicentre of the pandemic because of its huge population. But the state has recorded tremendous successes because of innovations by the Ganduje administration in fighting the virus.

Beginning of the end of virus in Kano

“This is the beginning of the end of COVID-19 in Kano State,” Ganduje stated shortly after taking his jab of the virus vaccine at Murtala Muhammad Specialist Hospital, Kano on March 11, 2023. He added that the best way to conquer the virus is to take the vaccine.

It was noontime when his physician, Dr Fakhraddeen Yahaya Muhammad, jabbed him the AstraZeneca COVID-19 vaccine on his left shoulder. Secretary to the State Government (SSG), Alhaji Usman Alhaji and some of his commissioners also took the vaccine. The governor then officially flagged off the vaccination exercise.

Kano received 209,520 doses of the AstraZeneca COVID-19 vaccine on March 10. The Kano consignment came along with that of Yobe and Jigawa states through the Aminu Kano International Airport.

As of Wednesday, May 24, the Kano State Ministry of Health said 110 persons have feared dead to the virus in the state. 3,852 patients have been treated and discharged. A total of 84,429 samples have been tested, of which total confirmed cases stands at 3,986 while active cases are 18.

Three persons were tested positive from 49 laboratories with six discharges on Thursday, it was learnt. Ganduje May have won the Coronavirus fight in Kano, but the state being a nerve centre of trade in the north and sub-Saharan region which receives an influx of business visitors daily, he needs to reinforce compliance of the protocols in order not to suffer resurgence of any new wave.

Unbelievable! Man Finds Out That His ‘Son’ Is Actually His Uncle After His Girlfriend’s Fling With His Granddad

REPUBLICAN NIGERIA is well known for the tradition of breaking news and has over the years, built a good image for being one of Nigeria’s most informative online news medium, publishing general interests articles, organised in areas which include Politics, National news, Metro news, Sports, Entertainment, Op-Ed and others.
Contact us: republicannigeria@gmail.com